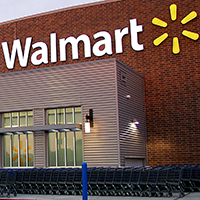 Sayonara, retail. Walmart is selling the Tokyo-based chain Seiyu after previously unloading its operations in the United Kingdom and Argentina. As The Wall Street Journal reports, the retail giant threw in the proverbial towel after 18 years in Japan, selling most of its stake in the local supermarket chain and continuing its retreat from slow-growing global markets in favor of ecommerce bets. The private equity firm KKR & Co. will buy 65% of Seiyu in a deal that values the 329-store, 34,600-employee chain at just slightly more than $1.6 billion. Walmart will still retain 15%, while Japanese internet company Rakuten will take 20%. Walmart has sold three longtime overseas holdings in less than seven weeks, each at a loss. Since 2018, when Walmart executives first outlined their strategy to step away from international and embrace higher-growth and ecommerce opportunities, the retail behemoth has gradually remade its global footprint. Two years ago, for example, Walmart bought a majority stake in Indian ecommerce startup Flipkart for $16 billion and has since invested in ecommerce operations in Canada and Mexico.

The end of third-party cookies is a headache for some and a business opportunity for others. Zeotap, a company that combines deterministic CRM onboarding and data enrichment services, raised $18.5 million on Monday from SignalFire, bringing its total funding to slightly more than $81 million. The additional raise is an extension of Zeotap’s $42 million Series C from July. Why are investors so hot on this category? It’s all about the move toward a more privacy-centric internet. But the opportunity that Zeotap is zeroing in on has become especially urgent this year in light of the ongoing pandemic, Projjol Banerjea, the company’s co-founder and chief product officer, told TechCrunch. There are two types of companies out there right now, Banerjea said: those that are using the current market as an opportunity to reassess their marketing and drive efficiencies, and those that are resilient and looking to scale. “Whichever category you fall in,” he said, “customer data is important.”

Put another tentative victory in TikTok’s win column. CampaignUS writes that the popular video-sharing app has been granted another 15-day extension – until Nov. 27 – of President Trump’s executive order requiring it to sell its assets in the United States, after it claimed in an appeal petition that it had received no communication from the US government for several weeks. The ByteDance-owned short video app had originally been given a September deadline to divest its business to a US buyer before transactions with the app would be banned. China-based ByteDance reached a provisional deal with Oracle and Walmart in September, allowing ByteDance to establish a new US-headquartered company called TikTok Global that would be majority owned by US investors. As part of the arrangement, Oracle would become TikTok’s “trusted technology provider” and be responsible for processing all of the US user data in its servers. However, control of TikTok’s source code and algorithms would remain with ByteDance – one element of the deal that may not satisfy user privacy concerns. Trump said he “agreed in principle” to the Oracle-Walmart deal on Sept. 20, but it is yet to be fully approved by the US government. The deal will also need to be approved by the Chinese government.