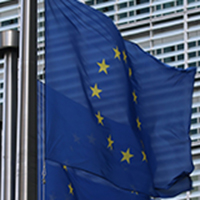 Add to cart: antitrust lawsuit. EU regulators filed antitrust charges on Tuesday against Amazon, accusing the ecommerce giant of using its access to data to gain an unfair advantage over the merchants on its platform, the AP reports. The news comes just a few weeks after the US Department of Justice hit Google with a long-awaited suit alleging unfair businesses practices in the search space. The EU’s case against Amazon comes two years after its top antitrust enforcer first started probing the company. Adding to Amazon’s regulatory headaches, the EU has also opened a second investigation into whether the company favors product offers and merchants that use its own logistics and delivery system. These are the latest efforts by Margrethe Vestager, the European commissioner for competition, to curb the power of big tech companies. In the past, she’s slapped Google with antitrust fines totaling nearly $10 billion and opened twin antitrust investigations this summer into Apple. It’s not a problem that Amazon is big and successful. Rather, Vestager said, “our concern is very specific business conduct which appears to distort genuine competition.”

As online shopping skyrockets during the pandemic, ad agencies are rushing to cash in on the ad dollars that are flowing to ecommerce, according to Business Insider. Dentsu, Horizon Media and IPG have all launched new commerce practices in the past few months while Omnicom, Publicis and WPP have either revamped or put more muscle behind theirs. This will continue to be a trend this year and into 2021. “Ecommerce, and, more broadly, retail media and marketplace commerce are top client priorities,” said Forrester analyst Jay Pattisall. “Clients and agencies are claiming a decade of ecommerce innovation in the last six to eight months due to COVID, so it’s no surprise that many agencies and consultancies are pushing further into that capability.”

In the days and weeks leading up to the presidential election, Facebook was under fire by Democrats and Republicans alike when it came to its policies on curbing misinformation. And the ire isn’t abating. On Monday, Biden campaign staffer Bill Russo publicly condemned the tech giant over its handling of the election aftermath, claiming that Facebook is “shredding the fabric of our democracy.” According to CNBC, Russo sent out a series of tweets criticizing Facebook’s handling of misinformation and calls for violence related to the election. Russo specifically pointed to the way in which Facebook dealt with (or didn’t) posts by Breitbart and its former chief Steve Bannon. Facebook banned a network of pages linked to Bannon for artificially boosting the number of people who could see his posts on the platform. But Russo argued that the effort was too little too late. His harsh criticism could be an early indication of how President-Elect Joe Biden will approach the social media platform and perhaps even the tech industry at large. In related “Facebook gets slammed” news: Facebook, and Google for that matter, are getting heat for their post-election political ads bans, which is cutting off advertising related to the Georgia runoffs. Damned if you do …