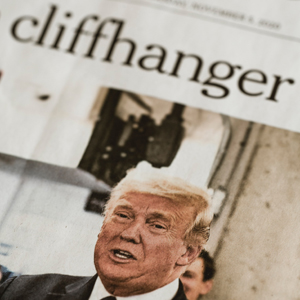 The absolute biggest question on everyone’s mind during the lead-up to the 2020 presidential election: How will media change? OK, maybe not the biggest. Regardless of who wins, expect regulatory consequences, Lucinda Southern writes as part of an Adweek staff roundup predicting downstream consequences for this industry. Trump will rail against perceived bias against right wing speech, while Biden will face pressure to keep the platforms from spreading misinformation. Jason Lynch pipes in that TV news will see a Trump slump. And agencies will smell an opportunity to position themselves as bridge-builders across the cultural divide. Finally, Ronan Shields anticipates an M&A frenzy before the end of the year, if Biden wins: “Cash-out quick before the tax man will take the bulk of your earnings.” Read on. Related in AdExchanger: “What will happen to paid media?”

With an economic stimulus hanging in the balance as the presidential election drags on, marketers are bracing for another period of uncertainty over the COVID-19 pandemic, where outlooks for policy impacts can change overnight and post-lockdown shopping flips from one channel to another. As Digiday reports, advertisers had pinned their hopes to more federal spending that would keep the economy afloat in the face of a pandemic that’s rapidly spreading, but agencies aren’t holding their collective breaths. The extended uncertainty isn’t triggering any kneejerk cuts to ad spending, and is cueing contingency plans that take a more pragmatic view of the upcoming disruptions to the economy than the panicked responses in the first half of the year.

Twitter and Facebook’s election integrity policies were put to the test when President Trump posted premature claims of victory and other false information on Tuesday and into Wednesday, with Twitter coming out the clear winner, according to Business Insider. Misinformation experts said that Twitter did a better job of labeling inaccurate posts, mainly because it placed restrictions hindering other users from spreading Trump’s claims. Facebook’s messages on Trump’s posts, meanwhile, were often more detailed, but the platform’s lack of sharing restrictions means “false information can still quickly spread.”

Stopping The Stream Of Data

With Google and Facebook in regulators’ sights, “players in streaming TV don’t want to provoke the same outcome,” The Wall Street Journal’s Sahil Patel reports. So what’s the solution? Providing the opportunity for consumers to give informed consent is the most popular option – and a common refrain in the ad tech community. But if scrutiny intensifies, that community might be in for a tussle, as they often lack the direct relationship with consumers needed to properly obtain consent. And while viewing devices such as Roku, or media owners including Hulu do, they’re not really willing to share consumer data all that freely. Read it.