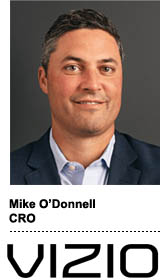 Prior to the strategic reorg, announced on Wednesday, Inscape operated as a largely independent entity.

Integrating Inscape aligns with one of Vizio’s overarching goals, which is to infuse data into its product innovation and to inform the content on offer through its SmartCast platform.

Vizio has launched more than 130 free, ad-supported channels for SmartCast this year based on its observations about the content and the categories that appeal to its viewers, said Mike O’Donnell, who is being elevated from SVP of Vizio’s platform business to its chief revenue officer.

“Data is the centerpiece of everything we do,” O’Donnell said.

Customers will still be able to use Inscape data for measurement and targeting. But Vizio has its eye on tapping into the ACR data Inscape has on more than 16 million households in order to improve the overall customer experience, to strike new partnership deals and to build advertising offerings for Vizio products.

“It all really starts with the best possible user experience on the platform, though,” O’Donnell said. “If you have that, if consumers are engaging and spending a lot of time with the platform, then we can innovate in terms of ad formats as streaming continues to grow.”

Since February, Vizio has seen 135% growth in engagement with SmartCast. On the hardware side, smart TV sales have also been on the rise this year, O’Donnell said.

But despite streaming’s massive growth, Vizio isn’t only focused on data-driven advertising in the streaming world.

“With ACR data, we can understand what our consumers are watching both in linear and in streaming,” he said. “That helps us bridge that gap for our partners and tell better stories for the brands and agencies we work with on the ad side.”

Take frequency capping, which remains one of the more persistent challenges facing the connected TV space. But making sure viewers don’t get hammered with the same ads over and over becomes an even trickier proposition at the household level when people are moving between their TVs and other devices.

That’s one of the reasons it makes sense to bring Inscape in house, O’Donnell said.

“Managing frequency capping is a challenge of addressability,” he said. “Being able to do that and also driving measurement and attribution on the back end, knowing what worked and being able to do this across apps on multiple platforms, plus linear – these are the things that will help us build better products.”

In addition to O’Donnell’s promotion, Zeev Neumeier, founder of Cognitive Networks, which is the company that became Inscape, will now serve as Vizio’s chief innovation officer. (“Zeev is like the godfather of ACR,” O’Donnell said.)

Jodie McAfee, previously SVP of sales and marketing at Inscape, will take on the newly created role of SVP of strategy and marketing for Vizio’s platform business.