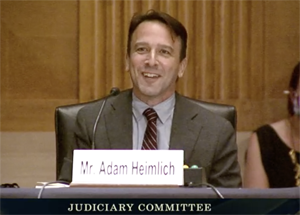 The questions from lawmakers were more pointed – and en pointe – than ever at a hearing hosted by the Senate antitrust subcommittee Tuesday looking into Google’s dominance in the online advertising space.

They discussed the intricacies of Google’s tech stack and the functioning of the ad tech ecosystem at large with a new level of aplomb.

There was even a brief discussion about the ins and outs of header bidding.

“This could be the beginning of a reckoning for our antitrust laws, to start looking at how we’re going to grapple with the new kinds of markets that we see across our country,” said Sen. Amy Klobuchar, D-Minn, and ranking member of the subcommittee.

Read on for some of the juiciest bits from the hearing.

Several times during his testimony, Google’s beleaguered representative at the hearing, the company’s president of global partnerships and corporate development, Don Harrison, testified that Google is transparent with publishers and advertisers about the fees it charges across its buy-side and sell-side platforms.

He repeatedly referred to a pair of blog posts Google published in June explaining how its fees work in the news industry and across the ad ecosystem.

Which is great. But, as Sen. Mike Lee, R-UT, and chairman of the subcommittee, pointed out, “sharing how fees work isn’t the same as transparency for users on the actual bids.”

“Google doesn’t tell me how much the publisher is receiving for displaying my ad or how much money from each advertising dollar Google might be keeping for itself,” Lee said. “It seems like that might be frustrating for an advertiser who’s trying to figure out whether or not she’s getting a good deal and consider comparison shopping.”

Google offers price adjustments based on how much money an advertiser spends through its demand-side platforms. That’s not uncommon. What is, though, is Google’s dominant position in video advertising and search, said Sen. Josh Hawley, R-Mo.

And Google uses that dominance in order to “incentivize and, indeed, monopolize the demand-side ad market,” said Hawley, noting that Google’s volume commitments have been increasing exponentially over time.

Programmatic agency vet Adam Heimlich, now the CEO of a new data science consultancy called Chalice, shared at the hearing a real-life example of this practice in action.

When Heimlich was at Horizon Media, he was in charge of selecting buy-side platforms for his clients. Usually, he’d suggest The Trade Desk. But when Google started to up the agency’s YouTube requirements, Heimlich was in a pickle, because it wasn’t possible to buy enough volume with YouTube and search alone. But Google allowed him to make up the difference by buying through DV360 – a possible example of tying in the antitrust context – which meant he was forced to take spend away from The Trade Desk and other independent DSPs in order to maintain his agency’s Google discount. (This was before 2015, when Google disabled third-party access to YouTube inventory.)

“And that was how DV360 got a foothold in the big agencies,” Heimlich said. “By the time I left that agency [in 2018], DV360 was the primary DSP on my trading desk, and had the most spend, and I had tried not to work with them at all.”

At one point, Google’s Harrison made a passing reference to header bidding being “better for publishers” in answer to a question from Sen. Lee about why Google, with all of its engineers and tech prowess, isn’t able to create a solution that stops advertisers from bidding against themselves in the auction.

“Publishers were making more money, I won’t quibble with that, but it was difficult for advertisers, because they didn’t know how their dollars were competing with themselves,” Harrison said. “One of our issues was to try to stitch that back together with a new product called Open Bidding that tried to give this transparency back to advertisers.”

That doesn’t tell the whole story, though, Heimlich said. Publishers made between 20-30% more revenue using header bidding, “but me, on the buy side – I didn’t see a hit,” he said. “And what that tells me is that money was going somewhere else.”

“It was either in the middle or we experienced it as a quality increase [after Google] stopped cream skimming when these headers went into place,” Heimlich said. “That is a very rare example of Google failing to dominate, and the effect was very dramatic.”