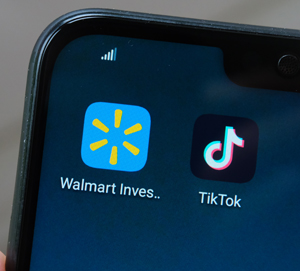 So what the heck does Walmart want with TikTok? The retailer, which has shifted toward ecommerce under CEO Doug McMillon, sees an opportunity to use the app as a virtual storefront while supercharging its burgeoning media business, The Wall Street Journal reports. Walmart brought its media business in house last year and is building an ad network to better compete with Amazon. And TikTok could also help Walmart with its cool factor among younger and higher net worth consumers – that is, if Walmart doesn’t mess it up. “The lines are blurring between traditional shopping, digital shopping and social media,” said Michael Lasser, a retail analyst at UBS Group. “Walmart needs more exposure to this trend.” In other TikTok drama, China announced new restrictions that may require the app to get government approval in order to export its algorithms, WSJ reports, and TikTok has implemented a hiring freeze in the United States, per Business Insider.

Ad buyers are getting wary of Facebook Watch. Over the past month, the number of monetization-eligible pages has shot up by more than 30%, with more than 24,000 pages joining the in-stream ads program in the past 30 days, Digiday reports. Enter (drumroll, please): Brand safety concerns. The flood of new pages includes everything from memes to mukbang. Facebook is going full-court press in its attempt to grab a slice of YouTube’s ad business but, according to some ad buyers, its approach to brand safety lags. “They’re prioritizing maximizing inventory at the expense of making it brand safe,” said Eric Patrick, VP of paid social at MediaHub. Amazing to think after the chaos of 2017 that YouTube is considered a benchmark for brand safety among ad buyers.

In case you forgot, the streaming wars are still on and Netflix has to step up its marketing game to compete with free trial and distribution offers from new entrants. So it’s offering 10 of its most popular movies and shows, including “Stranger Things” and “Birdbox,” for free to nonsubscribers, Bloomberg reports. People can watch this content without even signing up for a Netflix trial. Movies will be available in full, but only the first episode of a TV series will be free. (Way to hook ’em!) “We’re looking at different marketing promotions to attract new members and give them a great Netflix experience,” a Netflix spokesperson said. There is one major limitation, though: The free trial only works on PCs and Androids. That’s what happens when you start competing with Apple.