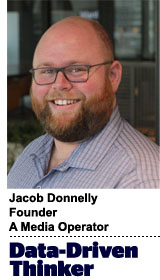 “The Sell Sider” is written by members of the media community and contains fresh ideas on the digital revolution in media.

Today’s column is written by Jacob Donnelly, founder of A Media Operator.

While there’s some truth to local media companies’ claim that Facebook and Google – which dominate the ad business – caused their demise, the reality puts more of the responsibility on local publishers.

While Facebook and Google innovated and created marketing products that advertisers wanted to use, publishers did the only thing worse than nothing. They obviated all responsibility for their advertising business, giving most control to providers of programmatic, 3rd-party cookie-driven advertising, letting them acquire an ever greater share of the ad business.

In what world does giving up control of one of the core drivers of revenue result in anything other than failure? This breaks down to two separate failures.

The first was failing to innovate around any sort of creative ad offerings. Local businesses were digital neophytes and, instead of hiring professional guidance, simply crammed more ads on the page. Unfortunately, I haven’t seen any local pubs introduce truly creative ad units. But for inspiration, they might look at national publications like The Washington Post, which has introduced unique ad units, such as its Fuse product.

The second failure was local media’s willingness to remove the audience from the ad impression. By turning ad inventory into a commodity, the contextual nature of media was no longer relevant. Additionally, we failed at building a direct relationship with the reader and collecting the necessary information about them to make our properties exciting places to advertise with.

By contrast, Facebook and Google kept all the user data and progressively added more. Equally as important, they built truly native advertising formats that, to this day, are some of the best products on the market. Why else do you think they can command such strong ARPUs?

The small businesses that once advertised in the newspaper are now Facebook’s biggest pool of advertisers.

How local media can claw its way back

To fix their lack of control over their ad business and ownership of their audience data, local media should first invest in gathering more first-party and contextual data. That data should be progressively captured as the user continues to engage with the site – specifically who they are and what types of stories they are reading.

The real model here is blending that given data with contextual targeting. So, getting more people to sign up for free access coupled with tracking what those people are consuming. All of that creates a blended profile. But the reality is simple: publishers won’t ever reach the scale of Facebook. It’s disingenuous to say they will. However, by providing a bit more than they do now, they can get a little back from Facebook.  But this blend of first party and contextual data gives advertisers plenty to work with.

Second, publishers will need to invest in creating native, self-serve advertising products. Self-serve is key – just think about how easy it is for local advertisers to buy on Facebook.

But deploying self-serve ad products can be tricky and there is currently a need in the ad tech space for this. To build a basic product, start by creating a portal with four pages. The first is for the advertiser to pick the data they want to target. Who is the person (first party data given to you) and what topics (contextual data you’ve gathered) are they interested in?

The second page lets advertisers upload creative and select their daily or total campaign budget. The third page is for payment. And finally, the fourth page is where they can get a preview of their creative – GAM can do this—and for them to purchase the ad.

Interestingly, media companies already offer this, but with their classified ads product. In a handful of clicks, I can buy a classified on The New York Daily News’ website. They need only expand that functionality to more exciting, native advertising treatments.

Facebook’s and Google’s digital ad dominance won’t to change, but if the pie is hundreds of billions, local shouldn’t give up their slice without a fight.